“In 1945, we used to go to Bindles every Saturday night. Because we didn’t have much money, I used to walk from my house in Porthkerry Road to pick up my girlfriend in Tydfil Street. We would dance all night, catch a bus back to Tydfil Street, and then I would walk back home. Then every Sunday we would go to Bindles again for coffee. There were other dance halls, but Bindles was the place we all went. I met my wife there and we got married in 1953. I like ballroom type formal dancing, but my wife was much more loose limbed and like to free dance, like the jitterbug.”

“My mother used to take me to the cinema. It was pitch dark: no street lights or light from houses; walking down Western hill in the snow with just my mums torch covered with brown paper. We used to call it the flea pit because you always came out with more that you came in with. The film was The Egg and I starring Claudette Colbert and Fred McMurray. The best seats were one shilling and sixpence and the Saturday morning cinema was sixpence. I remember a really nice boy bought me a chocolate lollipop”.

I used to go to Holton Road School and near the wall was the air raid shelter. We all had to carry our little bags with our gas masks in them, and when the sirens went off, all of us infants had to troop in. I spent my childhood in the air raid shelter. They used to bomb us a lot as they had Spitfires at St Athan and they wanted to get the docks. My dad had a reserved occupation and worked on the tugs. He worked all night and used to cycle home in the dark from Cardiff. One night as he was on his way home, he heard the aeroplanes overhead. He ran into our house at 20 Robert St and threw himself into the shelter just as they bombed Bassett street. My dad was also in St Johns ambulance and at the bottom of Western Hill was a First Aid post. When he wasn’t working, he used to bandage people’s injuries and he did the football matches too.”

I had my tonsils out when I was nine in the Memorial Hall, as it was a hospital in the war. It was upstairs and there were lots of soldiers there too. My friend Flo had her tonsils out on the kitchen table in her house when she was three years old. That’s how it was years ago.

We had a kitchen table that was also a Morrison Shelter. When the sirens went we jumped out of bed and under the table, because it was made of steel and it had mesh sides, so the debris wouldn’t come in. 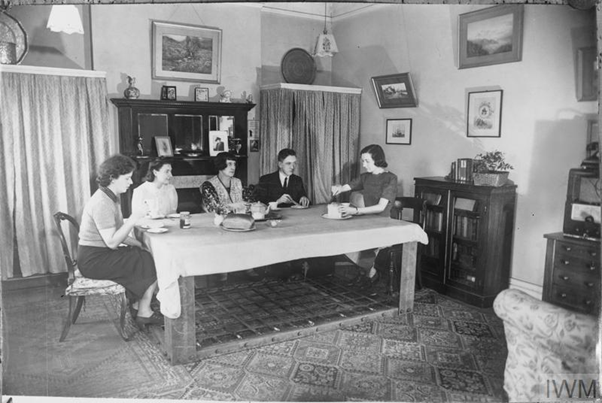 When we used to live in a tied cottage in Porthkerry out in the open. It had a corrugated iron roof and the debris used to come through it, so the lady used to open up the cellar for us and that’s where we used to go when the sirens went. We had no electricity; we went to bed with a candle.

My husband and I worked for Midland Silicone and we worked there for fifty years.

During the war, a 96 year old resident was asked to go to an employment drive run by Mrs Evans, the wife of Dan Evans who ran the department store in Holton Road. She was asked “what do you want to do for work” to which she replied “I want to be a nurse”. So they put her in Currans making huge steel tracks for tanks! Her favourite phrase was, “drop one of them on your toe and you’ll bl***y well know it”.

“There used to be a prisoner of war camp up on Port Rd, which used to be known as the Old Watery Lane.  One of the Italians who was there at the time, stayed on after the war and opened Terry’s Café on Holton Rd.”

There were US army camps in Wenvoe and one in Cowbridge  We used to say to them “any gum chum”?

Thomas’s motors always let everyone on.  They never turned anyone away. Going up Leckwith Hill everyone had to get off so the bus could get up the hill.

Sidroys underwear used to be waitrose, before that quicksave and before that sidroys. It was owned by Vanessa Felz’s Grandfather who used to come down every now and again in his Rolls Royce to keep an eye on us. I was a cutter and I used to cut out the underwear.

Fact: ‘Locally it’s called the knicker factory. … It made ladies’ underwear, corsets, bras, and (excuse the language) knickers, slips, nighties – everything.’ … It was called Sidroy Mills. The chap who started it, he had two children, Sid and Roy, and Vanessa Feltz is a child of one of the boys. So Feltz was the actual name but it was called Sidroy Mills.

Photos courtesy of Barry Past and Present

“They came in their hundreds, train after train. You couldn’t move on the beach. Where the shelters are, there are arches blocked in but then they were open with long tables to have their sandwiches on and big stone jugs to make tea. It must have been so nice for them, living up the valleys with all that coal, to come and spend time in the sea air”.

“I remember the Geest banana boats going up and down.  My husband used to work there in the summer and you were allowed to have whatever bananas you wanted. By the end of the summer, we were sick of them”!

My brother did his maritime engineering apprenticeship with Baileys on the docks and you could jump from ship to ship, and in the summer, they used to dive off the cranes on the dock into the sea.  He used to tell us how the Norwegian sailors were really good to the young apprentices. They used to give the boys big chunks of cheese and butter and would say “take them home to your Mother”. They remembered how good people were to them in the war. I felt safer then than I do now.

At school we usually came home for dinner but sometimes I took sandwiches; We had a coke stove and sometimes for a change we used to toast our Marmite sandwiches.

In my school in the first year of infants every afternoon we slept on little beds, and we had to queue up for our malt and milk, but we had to pay 4d a week for the milk. They used to line up the bottles on the radiator to heat it up, and it tasted foul. We used to have little bottles of orange juice too.

The baker used to come around the streets on with his basket of bread and the milkman Mr Jones came with his horse and cart.  The horse was called Mary and she always knew just where to stop. You went out with your stone jug and Mr Jones would fill it up for you

The dovecote that can be seen in Cadoxton is the only remnant that has survived of a medieval manorial complex that was present on the site where the present Cadoxton Court has been built. The complex would have once been…
Read
Previous Post

Location: Cadoxton – ChurchyardType: Haunting ManifestationDate / Time: Stone still present, sighting of ghosts pre 1920s Further Comments: A stone monument was erected in the churchyard in memory of Margaret Williams, whose murdered body was found on nearby marshland in 1822. Because she was…
Read
Random Post

At the end of the 19th Century, a group of mine owners and businessmen, led by David Davies of Llandidnam, met to discuss the possibility of building docks in Barry to export coal that was coming from their mines in…
Read
Random Post

In the later 1880's, mud was a huge problem, particularly during the winter. People reported that the town was dismal and  dreary with a wilderness of mud with no houses apart from the Central Police Station.  A postman also reported…
Read