World War I, sometimes known as the First World War or Great War, started in Europe and lasted from 28th July 1914 to 11th November 1918.

In the early days of WWI, the fort that was built on Nell’s Point was armed with Artillerymen. In the first four weeks of the war, over a thousand ships had been stopped by these six inch guns. There are reports that if Ship Captains did not shut the ships engines off, then orders were given in the fort to fire on the ships. A Belgium ship called Minister Beernngert was hit six times.

By the end of 1914, over one thousand four hundred men from Barry had enlisted. Troops were stationed in Barry and were housed in the school buildings. This meant that the children had to attend schools in church buildings.

In the aftermath of the war, at the Peace Day Celebrations in 1919, William Howell, Chair of the Council, estimated that fifteen thousand Barry men had served. Not all were volunteers of course; many of those men were conscripted after 1916. Of those, he estimated some seven hundred had died. Significantly, Barry as a port town was home to many Merchant Sailors. Of these, at least two hundred and sixty one died during the war. Their names are now recorded on the Barry Merchant Navy Memorial outside the Civic Centre. The greatest loss of life came in 1917, when a hundred and thirty six Barry Merchant seamen died. Ninety three more died in 1918.

By 1914, the year before the outbreak of World War One, Barry Docks, in the Vale of Glamorgan had surpassed both Cardiff and Penarth to become the largest coal exporting port in the country. The docks themselves were surrounded by dozens of business enterprises, everything from repair yards and cold storage facilities to flour mills and shipping agents. So when the German U-Boat campaign hit Britain’s imports and exports in 1917, Barry docks felt the impact.

To begin with, up until about 1916, people in Britain didn’t realise there was a food shortage. 60% of food in Britain was imported, so the potential was always there to cause disruption. Bread had gone up in price. A lot of tinned goods had sold out very quickly as people began to stock pile, as no one knew how long the war would go on, but for a year or two real food shortages didn’t occur.

Beer went up by a half-penny a pint. but that was because of the difficulty of getting the grain and the wheat and the barley to make the stuff, but by and large there were no real hardships.

The only hope that Germany had of winning the war at sea was through their U-Boats – the submarines, and as a result, the Germans put huge emphasis into building their submarine fleet.

The U-Boats objective was not to sink ships, but to starve Britain. Pretty soon the submarines were operating in the seas surrounding Britain and sinking merchant ships, including those destined for and from Barry Docks, at a rate of knots.

The British Government was loath to implement a policy of food rationing as that would have been a tacit acknowledgement that Britain no longer ruled the waves which it had prided itself on since the days of Nelson, but by April 1918 they were forced to introduce food rationing.

Potatoes became the staple diet, but disaster struck when in 1918, crops on many farms in the Vale of Glamorgan were hit by the deadly Wart Disease, causing major shortages.

During World War II (1939 – 1945), the docks at Barry were used to import war materials. A ring of barrage balloons protected the docks. One was located on the Mole and one was beside Barry Island Station.

The very first air raid in Barry was in April 1941. German bombs fell and hit houses at the West End of Barry and Barry Road areas. Incendiary bombs also fell over the Moors at Cadoxton and Porthkerry Park.

Reports state that a fight between a German plane and a Spitfire could be seen from Victoria Park in Cadoxton.

The U.S. Army built a large camp in the spring of 1942, to house the troops that serviced the docks. The 517 Port Battalion which consisted of about a thousand men in four companies, moved to Hayes Lane Camp in September 1943.

On the outskirts of Barry, U.S. Army Supply Depot G-40 – Thanks to the RAF and Welsh Office! 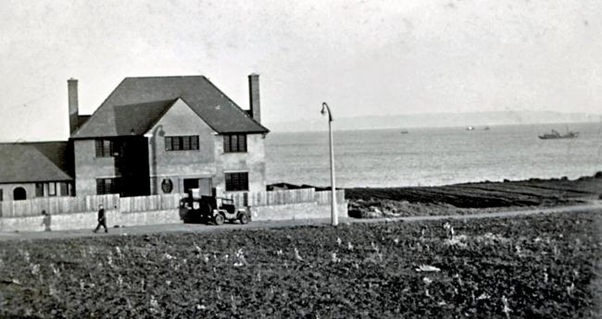 A United States Army jeep parked outside the US officers’ quarters at the General Supply Depot G-40, Barry. The photograph, thought to have been taken in January 1944, is believed to portray an American officer. Captain Jimmy Karkanes is seen walking away from the vehicle. In the background we see the Bristol Channel with shipping waiting to enter Barry Docks. G-40 played an important role in supplying the US Army in South Wales before D Day and then in France after June 6th.

This photo was taken by Captain, later a Major, William M Lyons. He was the US Army Distribution Officer at the depot. The building with the sea view became part of HMS Cambria in more recent times

Wales housed more than its fair share of these exuberant and sometimes brash young men who were, in the opinion of many, “over paid, over sexed – and over here”.

The “over sexed” comment was, perhaps, appropriate as there were over seventy thousand GI brides in Britain by the end of the war. Even a small South Wales town like Barry produced no fewer than fifty six of them!

There was virtually no part of Wales that did not see American troops, and the constant children’s cry of “Got any gum chum?” was heard on streets in towns as varied as Aberystwyth, Haverfordwest, Abergavenny, Swansea and Cardiff.

It was not just chewing gum that the Yanks gave away – the Americans were incredibly generous, wherever they were stationed. As D-Day approached, they happily presented the locals with cans of chicken, sides of beef or ham and tins of coffee, giving them out to anyone in need. For the people of Wales, who had been suffering from food rationing for several years, they were welcome gifts.

Barry, then an important port, became a huge hub for American Servicemen, with over forty ships eventually leaving the port to take part in the D-Day landings. They built a camp in the part of town known as Highlight, and used to take children from Cadoxton to picture shows, picking them up in their enormous six-wheeled army lorries. Never mind the cinema – for many of the Welsh children this journey was the highlight of the whole affair.

It was not all fun and games in Barry, however, and the ugly spectre of racism did rear its head on a number of occasions. Thompson Street in the town was eventually placed “out of bounds”, after an American complained that he had seen a black soldier being served in one of the clubs in the area.

The club owners and the Town Council, well used to serving men of all races and colours – this was a dock area, after all – refused to ban black soldiers, and the American senior staff took exception and refused their soldiers permission to even walk down the street.

A Festal Song with music by Dr J Morgan Lloyd and words written by Mr JM Edwards (Welsh) and Major Edgar Jones MA OBE (English). https://youtu.be/VJnmpaOzOtA The Festal Song was written in 1939 by John Morgan Lloyd. It was to…
Read
Previous Post

In one very unusual tale reported in the Barry Dock News in 1892, a gang of vigilante ghost hunters took it upon themselves to track down a spook which had been sighted in Pencoedtre. “They camped outside what they believed…
Read
Random Post

The Island was purchased in 1856 by Francis Crawshay. He was an Ironmonger from Merthyr. Francis built the Marine Hotel, which was renamed Friars Point House at a later date. He also made arrangements for visitors to be brought to…
Read
Random Post

During the 1920’s, the people of Barry decided that they wanted to build a memorial for all the Barry people who had lost their lives fighting for our freedom during the First World War. People thought that it would be…
Read
Random Post

The Barry and Cadoxton Gas and Water Company 1886, provided the gas for street lighting and houses and there was a plentiful supply of fresh water.  In August 1890, gas lamps were in use on many of the roads in…
Read
Random Post

The growth of Barry led to an urgent need for emergency services and a Police Force was one of the main needs. The first policeman was based in a small cottage in Main Street, Cadoxton. In 1886 the County Police…
Read